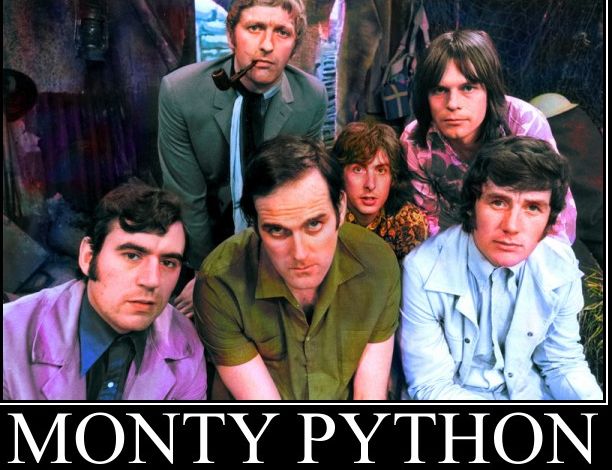 Unfortunately my Hall of Idols is over. It’s a shame really because I loved to do it and I can safely say it was the most pleasant thing I ever wrote here in the blog. I love Rock Chain but the Hall of Idols was just as pleasant and it took me half the time and effort to do it.

However, like any good luxury edition release, I thought about putting some bonus in it.

The criteria used to the additions as bonus was only one: people who influenced me as a whole and I couldn’t pinpoint exactly who individually. And here’s something interesting: I concluded that all bands that I love had some guy in there who I liked better. Not even The Beatles influenced me or were as important to me as a whole. John and Paul were much more, especially Paul (probably the greatest idol I have in my life considering all areas).

Anyway, with that in mind I only could think of two bonus tracks and thi is the second.

As a writer I can safely say that there is nothing harder to write than humor. It is really hard to be funny on paper. It’s not a coincidence that 99% of stand-up comedians have teams of writers. It’s difficult to be fun. You can think of Woody Allen and Jerry Seinfeld, for example, but they cannot be your standard. They are geniuses.

If you ever watched any late night shows (we miss you Jay Leno and David Letterman!) and wait until the credits roll, you’ll see that there are teams who write for those people. Real Time with Bill Maher (a personal favorite) has a team of writers.

And when you have people that probably could do it alone, but they get together anyway, then you’re on to a real winner. And that’s what happened with the collective that became known as Monty Python.

Monty Python was the result of six British geniuses: Graham Chapman, Eric Idle, Terry Gilliam, Terry Jones, John Cleese and Michael Palin. They all worked in various British TV series as members or writers in the mid-sixties (one of those, I actually own in VHS is from 1968 and is called How to Irritate People has John Cleese and Graham Chapman as cast members and writers is absolutely hilarious, specially the “Egocentrism” sketch).

Depending on what source you read about the background of how the six got together varies, but the most accepted is that Cleese and Chapman admired the new style of comedy done by Idel, Jones, Palin and animator Terry Gilliam in a show called Do Not Adjust Your Set and suggested that they join efforts to form one group and seek production sponsorship.

The fact is they got together and first through Monty Python Flying Circus and later with their movies they probably performed some of the greatest moments in comedy history.

I’ll be honest and say I can’t recall everything about Flying Circus, but the satire, surreal humor, nonsense and black comedy that spun from it will be forever unmatched. I guess is the pinnacle of the quintessential great British humor. I remember some historical sketches like “Dead Parrot sketch”, “Nudge, Nudge” and “Ministry of Silly Walks”.

But for me, personally, what made the Pythons so special were the movies. I mean, I don’t know how many times I watched Life of Brian and Holy Grail, but I laugh my ass off every single time. Hollywood Bowl (the “We were so poor, we lived in a shoebox” quote and “Schopenhauer is pessimistic” in the final of Soccer World Cup of Philosophers made my back ache from how much I laughed) and The Meaning of Life (the Reaper pointing to the salmon mousse is just brilliant) are also wonderful but those two…

Life of Brian is the greatest satire of religion ever made without being offensive. Even a radical Christian can watch and laugh as he never laughed before. I mean how can you not laugh when the three wise men go to the wrong manger because they lost track of the guiding star? And how about people who can’t hear Jesus and start a fight because of nose sizes? And the fake beard salesman? There are too many things to list… And it was funded by George Harrison to boot.

Holy Grail doesn’t stay behind. I mean, the Holy Hand Grenade? The Knights who made Ni? The three questions?  Actually, when just writing or reading about it like that, seemed utter ridiculous, but when you see it is hilarious and magnificent, to say the least.

Now, all the idols in the hall have a magazine to read and some comedy to watch!

UK Subs – Before You Were Punk: The Very Best of UK Subs

Be sure to check out my book “Straight and Lethal”